CAN A CAMPAIGN BE "ABOUT" SOMETHING?

THE ANSWER MAY SHOCK YOU!

In the Last Future, all the gods are dead. Many of them died in great cosmic wars, some were turned to stone by the Antimatter Basilisk, and others simply fell into obscurity and descended from godhood. The very last to die were subsumed by Ultima Zero.

There are a couple reasons why I wanted the setting to be this way, but the "point" is because I want my friends to feel like this world is different from the various fantasy genre (high, weird, grimdark, etc.) settings we've played before. They assume that a fantasy world will have fantasy gods, so it should tell them something when there aren't any.

Most of the decisions that went into making the Last Future were things that I sort of just settled on and came up with justifications for later on. I feel like this is probably the case for 90% of every game setting ever.

I feel like D&D and it's counterparts can generate a lot of different and interesting stories, but I don't think they are well equipped to convey certain standard narrative elements—specifically, themes. You can have a plot, sure, and it's really easy to convey a tone, but to try and make a campaign "mean" a specific thing? Good luck. It can be tempting to do this, because I feel like deep down anyone seriously invested in RPGs understands, or at least wishes, that they're capable of more than just the sum of their parts. But the way old school D&D is played makes it uniquely bad at establishing a cohesive theme.

Without having all your players sign on to your vision, actually having a theme isn't feasible. Themes are generally conveyed in stories by the outcomes and repercussions of plot events. In games, where "plot events" are determined by dice and it is up to the players to decide how to deal with them, you'll undoubtably need to resort to the loathed practice of railroading to get your point across. Is this what storygames are about?

It's been said many times before that D&D campaigns are closer to picaresques than standard adventure stories. While I agree with this, I feel it can be misleading. D&D campaigns are similar to picaresques, but they aren't picaresques through and through. A campaign is a cohesive thread of events that develops as the players interact with the game world. A story emerges, but not necessarily a capital-N Narrative like the kind you read in books.

I know this isn't groundbreaking stuff—anyone who has DMed a couple sessions could probably understands this already. But here's a SHOCKING REVERSAL that will lead to a THOUGHT-PROVOKING CONCLUSION:

Maybe you can't make a game emulate the trappings of a narrative, but perhaps through tuning the campaign elements—the settlements, the NPCs, the encounters, the faction drama, etc.—toward something resembling a theme may arise.

One probably wouldn't want to tune their campaign too explicitly, because that would get really tired and same-y after a while. Instead, they should just use the "theme" as an idea to orient the worldbuilding.

One thing I want to capture in the Last Future campaign is the same sense of absurdist nihilism present in Vance's Dying Earth series. Of all the qualities those stories have to be enamored with, I was particularly taken with the ever-present sense of weird pseudo-nihilism that suffuses just about every page of every book. The sun is about to go out and everyone knows it. But that doesn't stop people from caring about things, it just meant that their cares are absurd and often frivolous. There's that guy Cugel met on the beach who was looking for the necklace his ancestor had lost ages ago—why the hell was he doing that? The sun could go out at any minute! And yet he pressed on. And you're reading it, and you're wondering if Jack Vance was a fan of Kafka, because he must have been. That's a great scene, and you can lift it perfectly into your own campaign.

I want a setting to convey that feeling. I want the players to come across figures that are weird and narcissistic both as a result of and in light of the fact that the universe will soon be swallowed by a massive black hole and there's nothing anyone can really do about it. I have no way of controlling how the players react to this, but I can control what they react to. In coming up with the various structures of the campaign world, I have attempted to use this idea as a guiding light. I would love to be able to speak with more authority on this subject, but I'm only now putting it in practice. I will nevertheless report back with further meditations as the campaign progresses.

Several GUMPTION WAFERS are depleted from your GRIT CIBORIUM

When I was at an appropriate age to be interested in such a thing, I was an avid reader of Homestuck. Andrew Hussie's multimedia web epic hit me at exactly the right time in my life and, along with many others in my specific age and interest cohort, I got swept away. Like many an eager MSPA reader I also devoured Problem Sleuth. I found the story to be quite enjoyable (needless to say, since Hussie's writing is scientifically formulated to mimic the effects of crack in the brains of a certain subset of internet-addled early-to-mid adolescents).

One of the things that really grabbed me were the overblown video game pseudo-abstractions that exist in what would otherwise be a purely narrative story world, a la Scott Pilgrim. They were funny because they riffed on video games and they used weird antiquated language, but also because they were a genuinely compelling idea in and of itself—at that time no one had really tried to tell a story like that before.

The experience of reading Problem Sleuth, and to a certain extent early Homestuck, is similar to being really young and watching a friend's older brother play a video game you've never seen. Everything seems awesome and complex and all over the place, and after a little while some parts begin to fit together and you can make out a certain logic among all the action. 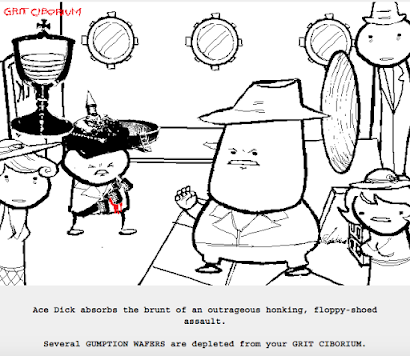 You don't know exactly what every mechanic does and what they're used for, but you can piece together just enough from the context clues to have an idea about what's going on and make you want to play even more. That's what these stories capture—the sense that you're watching someone play a video game that's really fun and interesting (written by Andrew Hussie, after all), and you want to play it too.

Part of the "joke" of these game abstractions is that they are all complex and boutique but still relatively straightforward. It just wouldn't work if the PLUCK RELIQUARY was just a health bar or the OSTENTATION DRIVE just a limit break or whatever. They are different things, and the difference is interesting. 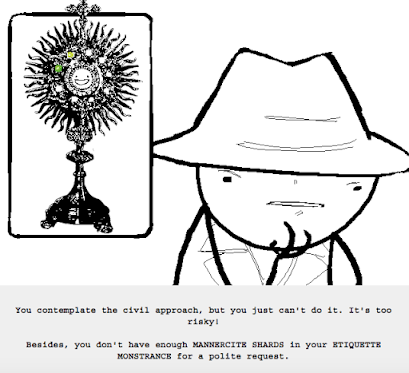 The point that ties this back to D&D is the appeal of D&D's resolution mechanics. While Problem Sleuth is explicitly riffing on video games instead of D&D, the same principles apply—perhaps even more so for D&D, since Problem Sleuth as a story is much closer to something out of a TTRPG instead of a video game.

Most modern TTRPGs, including modern D&D, rely on unified resolution mechanics (meaning all checks made with the dice are done in the same manner). Meet or beat a target number on a d20, roll 2d6 to determine degrees of success, etc. It's simple game design, easy to understand, and easy to put in practice. Meanwhile old-school D&D has got resolution mechanics out the ass—roll a d20 under a number to determine an ability test, roll a d20 over a number to determine a saving throw, roll a 1 on a d6 to see if a monster pops up, 2d6 to see how it tries to eat you, d% to see if that idiot thief can finally scale a wall without falling off this time. 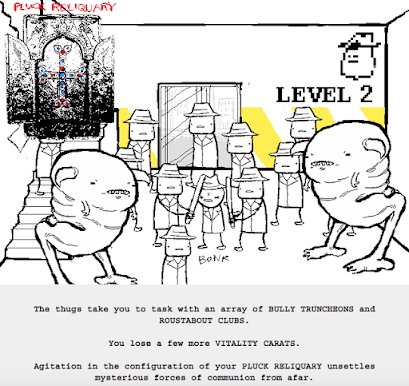 The classic argument for why people favor non-unified resolution mechanics over unified ones is that different elements of the game ought to be distinguished mechanically as well as narratively. What a reaction roll represents is fundamentally different than what a dexterity test represents, so it makes sense that they should use different mechanics. I agree with this argument, but even if it weren't the case I believe I'd still be in favor of non-unified resolution mechanics.

There's something undeniably appealing about non-unified resolution mechanics. It harkens back to those days I'd spend hunched in front of the computer after finishing my homework, flipping through the virtual pages of an overwritten web comic thinking "man, if only I could get a video game like this." Obviously it's all just rolling dice, but my simple mind is transfixed by the strange magic of tossing shapes and consulting different charts and lists. 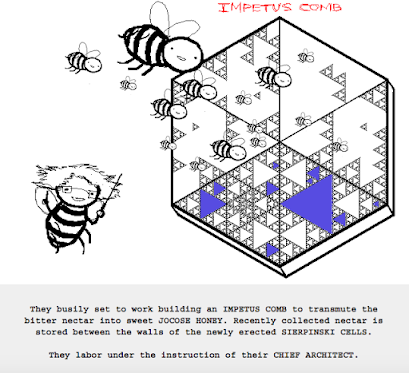 Rolling the same kind of dice to try to get the same kind of outcome over and over again is fine, but something about it gives me an uncomfortably plastic, smooth, Marvel movie focus group kind of vibe. There's nothing for my mind to latch on to; it's too easy to get.

Non-unified resolution mechanics can be sloppy. They can lead to clutter, they can be difficult for players to pick up, and they could really easily lead to the dreaded rules bloat. I don't have a cunning refutation to any of these arguments, other then the fact that they're all pretty easy to spot and remedy in a game you fundamentally understand (could be a different story if it's something you're reading for the first time). And yet it's not enough to deter me. I got seven different kinds of dice, and I'll be damned if I can't roll all of them in one session.