Two of the six players in my game quit their jobs and have embarked on a cross-country road trip with their girlfriends having what I hope is the time of their lives, flying rugged and free through the veins of America. Another player just moved and is stoically attempting to return his life to a comfortable equilibrium. A fourth is also unemployed and devoting the brunt of his time + spiritual/mental energies toward a creative endeavor while also, somehow, looking for a job. All of this is to say: the Last Planet campaign, which I have written briefly about before, is on hold. That’s fine. These things happen. Since we’re all friends, we’ll inevitably start playing D&D again eventually.

But now that the campaign is on hold, my creative drive is left to drift and wander on its own without a weekly game around to orient it. I’m sure plenty of other people have experienced this—when not preparing for and running a regular campaign, all those old unused ideas start to come out and roam around your mental landscape, while simultaneously your significantly more receptive to any new idea you come across because you don’t need to expend the mental energy thinking about how you can implement it into your game.

What this means for me is that the kernel of a new campaign is beginning to form in my mind. I’ve had a bunch of different ideas and things I wanted to try that I haven’t been able to yet. And now I’ve reached the point where I might actually have something here, and it’s time to set the ideas down on the page.

The campaign is based around the premise that alignment is the most important factor in the game.

What would this look like? Well, I could see this as meaning that religion would have to be a pretty big deal. The way alignment makes the most amount of sense in my head is as some sort of large cosmic-scale conflict between law and chaos, which manifests itself in the material plane spiritually just as much as physically.

Societies would be much more oriented toward their specific alignments, though not in the Law=authoritarian, Chaos=libertarian sort of way. In the original framework for alignment presented by Poul Anderson in Three Hearts and Three Lions, the Nazis were said to be agents of Chaos. This would suggest that chaotic societies are organized around strength and power, but that could also include like insular group power, so that anarchistic communes would also be chaotic. Whereas lawful societies would be more diffusely organized around monarchy, aristocracy, bureaucracy, (democracy?), and both would also have a strong religious authority, for reasons stated above.

I have a lot of thoughts about alignment. I think that the classic Law/Neutrality/Chaos scheme is more interesting than the nine-point AD&D version because in my mind Law and Chaos are more interesting concepts to throw cosmology at than good and evil. Once Good and Evil are introduced into the alignment scale, they sort of take precedence over law and chaos because they’re easier concepts to grasp onto, and most characters end up being some flavor of good or neutral unless they want to be edgy and contrarian. But good and evil have been done to death already, and planning a setting where good and evil are axiomatic truths where some people (or species, actions, etc.) are inherently good while others are inherently evil is a whole can of worms I don’t care to get into.

That doesn’t mean I don’t think good and evil should not exist in the setting, only that they ought to exist like they do in the real world, where good and evil are mostly just descriptive terms that are shorthand for much more complicated and nuanced behaviors. No evil person considers themselves as such, only that other people are evil.

I’m also really not interested in the sort of both-sides-kind-of-suck Moorcockian view of Law/Chaos, since it leads to the lame kind of “moral grayness” where players have to choose between two equally bad outcomes or, if available, go for the third-way balance/neutrality/moderation option that is clearly better than the other two.

The best way I can think of to thread this needle between 1) Law and Chaos being more than stand-ins for good and evil while also 2) not being essentially equivalent to one another is to have alignment represent beliefs and values, like opposing religions or governing principles. Sort of like how Gygax originally intended it.

My vision for the campaign is for it to adhere sort of close to the original concept of D&D’s classic implied setting, since I’ve been doing pretty much the opposite of that for quite some time. It’s going to be a points-of-light sort of deal, where human civilization is mostly oriented toward law but actual settlements are few and far between and the wilderness is chaotic (though not completely Chaotic) and dangerous. While civilization itself is lawful, humans are just as predisposed to law as they are to chaos, which means that some human settlements will also be chaotic. Monsters, too, would be primarily chaotic, but not inherently; they might just be more predisposed to catching the chaotic wavelengths that flow through the universe.

That gives us Law as the side of humans and human societies, barring a few exceptions, and chaos is the side of monsters and humanoids, once again barring a few exceptions, and the wilderness as a sort of neutral but dangerous middle ground. This is good—I want elementals and nature spirits and stuff to be neutral. Demihumans are also neutral, as they are uninvolved in the cosmic conflict between Law and Chaos, but they can take sides if they like.

So so far Law and Chaos represent differing governing ideologies that aren’t really that different in the first place, they’re both expansionist and also spiritually opposed to one another. It’s more of just a justification for me to allow for orcs to be antagonistic to players without being inherently evil or neutral enough to be like “haha gotcha, bet you feel like an asshole now” when it is revealed that they’re just trying to live their lives when the PCs came along and killed them. Sometimes It’s good to have the players feel justified in their actions.

Why are lawful and chaotic people/societies opposed to one another? The cosmic conflict. The “point” of the campaign is that Law and Chaos are vast, opposing forces and our planet is just a little proxy war in the midst of a much larger struggle. 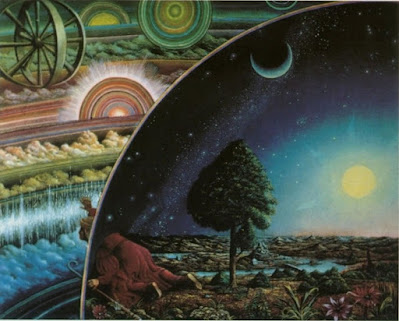 Making this all manifest in the game would actually be pretty easy: everyone the players come across would have their goals and motives oriented toward their alignment. Circumstances players confront would be contingent on what they have written down on the alignment slot on their character sheet. Gods and demons would be prominent forces in the campaign world. Otherwise, it will still be D&D as normal.

Following the very useful and not-at-all ill-considered advice in the F*fth Edition DMG, I made a whole cosmology for the campaign before doing anything else. Why? That’s a good question. Anyway, it’s based around gnosticism and Qabalah and the Blakean mythopoeia and other high-minded and pretentious things I’ll get into in a later blog post.