Three monsters from the Last Planet

These are some creatures I made for my homebrew Last Planet setting. There isn't really any "natural" fauna in the Last Planet, instead all creatures are some flavor of mutant or the product of bio-engineering. Originally I had intended to come up with an elaborate generator to make a bunch of unique creatures so the players would never run into the same type of twice, but I scrapped that idea when I realized it's actually just more fun to make up new monsters or use ones I find on blogs, modules, etc. Random generation is great for inspiration, There's nothing that can really be gained by having a bunch of mass-produced monsters with formulaic stats and abilities. Even if they all are distinct—all equally unique, all equally forgettable. So the lesson here I guess is that small-batch artisanally crafted monsters are superior to randomly generated ones. Who knew. 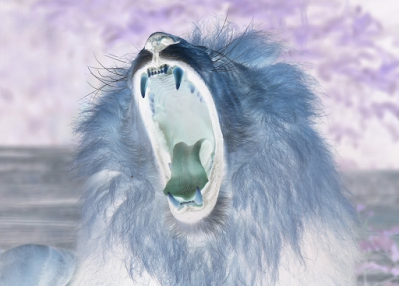 Slam: +4 to hit against human-sized creatures or smaller. If both attacks hit, the target is knocked to the ground.

Acid Spray: 1-in-4 chance each round to spray of acid out of it's trunk. Deals 2d6 damage in a 30' line, save vs. breath for half. The target's AC is increased/reduced by 1 if the save is failed and they're wearing armor.

Hide: Acridon hide is is an incredibly tough and can be used to make acid-proof hazmat suits. Getting a suit made costs 60 sp and requires an expert the likes of which are usually only found in big cities.

Acridons are tuskless mastodons with bright orange fur and big, emerald insect eyes that bulge out from their face. Their trunk is tipped with many fine holes like a sprinkler hose. Acridons congregate around acid lakes and radiation zones, and are known to make long pilgrimages to new regions when the specific kinds of flora and fauna they feed on becomes too scarce. They can spray highly corrosive acid from their trunks, which they use to partially digest their food before they consume it as well as for self-defense.

Charge: A bolt beetle can spend its round flying up to 60' in a straight line while radiating volatile energy. Every creature in its path must save vs. magic wand or else take 1d6 damage.

Note: if you're playing with theater of the mind combat, a bolt beetle can hit 1d4 PCs per turn. If players specify that they position the PCs so that they are not standing in-line with one another, the number of PCs a bolt beetle can hit drops to 1d2 and the PCs must move at effectively half speed in order to account for maintaining their positioning.

Bolt beetles are the size of your fist, with knife-like wings and a horn shaped like a lightning bolt. Their shell is so iridescent that it's hard to tell what color it is, but close up they range from vibrant green to a deep electric blue. Their elytra is made of a special material that stores the kinetic energy expelled by their wing beats. They often fly together in lazy patterns, but when they are agitated or need to defend the nest, they can release this energy to rocket forward and drive off the invaders. When they charge, they emit a bright green light and shoot out sparks like an angry firecracker.

Hyperlion (pronounced like "Hyperion," but you can call it hyper-lion if you want. I'm not your dad.)

Horn beam: If the beam deals more than 25 damage and the target survives, they immediately gain 2,000 xp and the undying respect of the hyperlion. This can only happen to a PC once in their lifetime.

Hyperlions were originally created to serve as weapons in the ancient war between the Veiled Kingdom and the Men of the Crystal Pyramids. Both sides fell in the conflict, but the hyperlions remain. A hyperlion is a mighty creature so thoroughly suffused with power that their blood runs white-hot and when they roar it sounds like the beat drop in a late-2000s dubstep track. They have platinum-blue fur, a wispy fuschia mane, and a spiraling unicorn horn that crackles with energy. From their horn they can fire a crimson beam of energy that carries with it part of the hyperlion's very life-force. The beam is remarkably dangerous, but it is said that some who have been stricken by it and survived have incorporated part of the hyperlion's essence into their own.